Jelenew and Stéphane Rolland always need to consider a question when designing red carpet dresses for Kat Graham, how to break the barriers of technical sports and artistic aesthetics and perfectly mix and match sportswear with haute couture fashion. As Stéphane Rolland said, "sportswear is a treasure of ingenuity of technical prowess, and couture makes technical prowess in another kind. If we link the two together, it can only give interesting things."

From the perspective of a master artist, Stéphane Rollan reinterprets contemporary art-Chinese fans with a Strapless dress in black draped chiffon embroidered with "Tuan Shan" fans in silk threads.

The black cycling leggings worn by Kat Graham are different from ordinary leggings. They are cycling leggings in the 1+1 model outer padded cycling pants specially developed by Jelenew to improve women's cycling health and comfort. Cycling leggings and detachable outer padded cycling shorts are collectively called "1+1 model outer padded cycling pants", just like Lego, can be "assembled freely," remove the outer padded cycling shorts, that is, pants that can be worn on the street, or even pants that can be worn on the red carpet. It is also a pair of haute couture cycling pants with a sense of the vanguard of the female era created by Di Liu, the creative director of Jelenew, who took the "Goddess of Victory" in the Louvre as his muse and took inspiration from the Spanish 17th-century noble knight pants. The trousers introduce the design of high tailoring techniques into the design. Together with the split and patch design, the Jelenew cycling pants fit far beyond that of professional cycling pants on the market, better supporting and wrapping muscles, and eliminating sports fatigue. But also to avoid varicose veins in the calf. It has a stunningly high-end feel, but it is also highly functional and wearable, making women's professional cycling pants a reality on the red carpet. 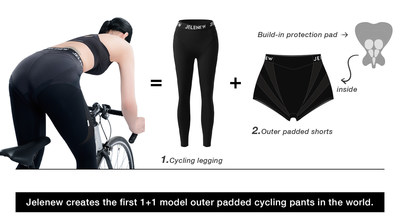 As one of the few fashion designers in the world to continue the unique Savoir-Faire of French haute couture, why did Stéphane Rolland find Jelenew, an avant-garde cycling brand?

"You know for things to work, there has to be mutual respect and admiration. Jelenew creative director Di and I have known each other for maybe two years, three years, I don't know exactly.And what I like in Jelenew is that there is a real refinement in the work, there is an ergonomics which is perfect, a perfect resistance."Stephane Rolland said.

He used one word to describe his collaborative series with Jelenew - FUTURE: because it is an open door which is precisely a very pretty future, to make a model that is made for sports: elegant, refined and hyper glamorous, even sexy.

It is reported that Jelenew's haute couture cycling pants have been sold on its official website, currently 129 US dollars.

Jelenew is an American avant-garde cycling brand born for women. It creates the first cycling pants truly made for women in the world. It brings the groundbreaking combination of "Haute Couture and Sportswear" and carefully designs each product with "luxury moulage technique" to provide a more refined sports experience and promote a healthy lifestyle for cyclists to enjoy elegant and stylish suburban cycling.